Explore the findings of the second report of the "Solarize Africa" series.

Fall of the 52 Gigawatt Cap for Photovoltaics

Munich/Pforzheim, May 11, 2022: Political developments in recent months have demonstrated the need for a secure and independent energy supply for Europe. The success of the energy transition is linked to the accelerated introduction of a green hydrogen economy, in addition to the increased expansion of renewable energies. For the second year in a row, green hydrogen is one of the focus topics at Europe’s largest energy industry platform, The smarter E Europe. Today - on the first of three days of the exhibition - a study on solar steel production was presented: Jorgo Chatzimarkakis, CEO of Hydrogen Europe, announced the launch of the Steel from Solar Energy study, with the support of The smarter E Europe. The aim of the study is to show the conditions under which steel can be produced economically from iron ore using hydrogen from renewable energy sources. The study is available for free download. 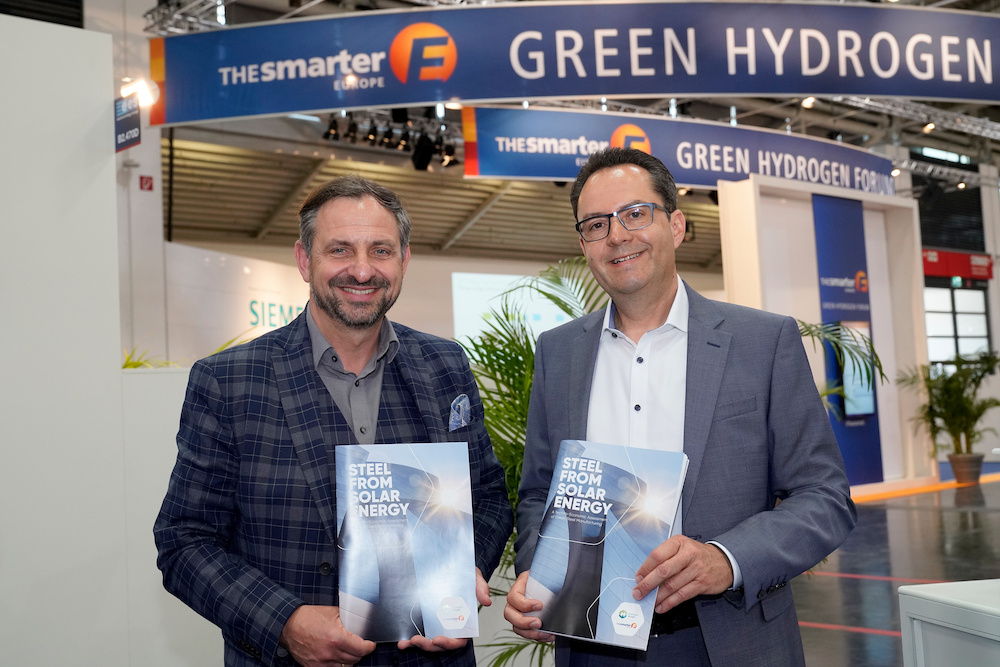 Produced in a climate-friendly way and without fossil fuels, green hydrogen is versatile and is
considered an important component of the EU Green Deal in order to achieve climate neutrality. The “Steel from Solar Energy” study analyzes the feasibility, framework conditions and economic viability of decarbonizing the steel industry by using renewably produced hydrogen. "Green hydrogen is an essential part of the solution for a fossil-free energy supply in Europe, especially in difficult times. Our Steel from Solar Energy study helps to show that the decarbonization of industrial processes is of paramount importance to fight climate change. Europe has a real opportunity to lead the way towards achieving climate neutrality, " said Jorgo Chatzimarkakis.

Specifically, the study provides evidence that steel production from iron ore with hydrogen produced from renewable energy is possible. The steelmaking process is responsible for around four percent of all greenhouse gas emissions in Europe - so using green hydrogen can make a significant difference in terms of climate neutrality. The study also reveals the challenges that the hydrogen economy will have to deal with. To begin with, a sustainable conversion of the steel industry involves high costs: Converting an average plant that produces about four million tons of steel per year from iron ore from the Furnace-Basic Oxygen Furnace (BF-BOF) process to a hydrogen-based direct reduction process with electric arc furnace (H2-DRI-EAF), requires electrolyzers with a capacity of 1.3 gigawatts (GW) if operated at full load. This results in costs of about €3.3 billion. However, if the hydrogen is produced exclusively using variable photovoltaic electricity, almost five GW of electrolyzer capacity worth €7 billion would have to be invested. Of course, electrolyzer utilization can be optimized, for example, by combining multiple renewable energy sources or 24/7 green power supply contracts (PPA). There are currently 25 BF-BOF plants in Europe with a capacity of 103 million tons of hot metal per year.

Green hydrogen at The smarter E Europe
Despite the economic challenges, the steel industry and energy suppliers have recognized the signs of the times. Several projects in Europe aim to introduce the necessary technology and make "green steel" economically viable. The recent study launched at The smarter E Europe makes it clear that rethinking the steel industry is not only sensible but downright necessary. Some 2.6 million jobs have to be sustained in the long term through the increased use of green hydrogen.

According to Markus Elsässer, founder and CEO of Solar Promotion GmbH, organizer of The smarter E Europe, the Green Hydrogen Forum & Expo will continue to provide the space to refine and develop the opportunities and possibilities of a green hydrogen economy: "With the Green Hydrogen Forum & Expo, The smarter E Europe offers a cross-industry and cross-sector meeting place for companies from all over the world with the goal of bringing hydrogen, fuel cells, electrolysis and Power-to-Gas to the markets at an accelerated pace. The topic will continue to be a focus for us in the coming years and we are pleased to have strong industry association partners at our side, such as the European trade association, Hydrogen Europe, and the German Hydrogen and Fuel-Cell Association (DWV) as well as the European Gas Industry Association, Eurogas."

As part of The smarter E Europe 2022, the Green Hydrogen Forum & Expo will take place in hall B2: During three days, international experts will speak at the forum on political framework conditions, the international markets, the required infrastructure, technology innovations, cost-saving potential and hydrogen lighthouse projects.

Browse all exhibitors or use filters and search function to find exactly what your are looking for.

This second report in the "Solarize Africa" series investigates recent developments and future trends on the African continent.