Prepared for the Winter

With its ecoAutonomyStorage system, the Swiss company ecocoach AG offers an intelligent combination of photovoltaics, battery storage and a combined heat and power plant. The result: over 80 percent self-consumption and an uninterrupted power supply. 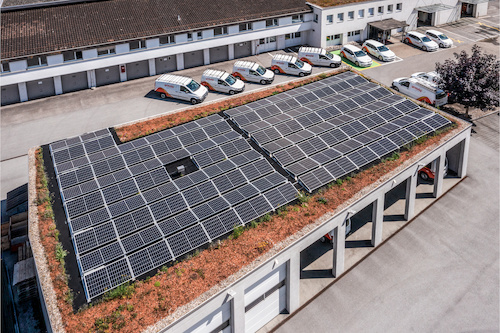 The gas supplier GRAVAG from St. Margrethen in Switzerland has put such a combination of photovoltaics, battery storage and combined heat and power plant (CHP) into operation for the first time in Switzerland together with the newly developed Total Energy System (TES). The TES controls the plant network and was co-developed by GRAVAG.

The pilot plant was commissioned in July 2021 and has been running smoothly since then. In the summer half-year, the PV system with its output of 36 kilowatt peak (kWp) and an area of around 180 square meters covers the entire electricity and heating requirements of the office and commercial building at GRAVAG's headquarters in St. Margrethen. In the process, surplus electricity is fed into ecocoach's ecoBatterySystem with a capacity of 65 kilowatt hours (kWh). When the battery storage is also fully charged, the excess PV electricity is converted into heat and stored. This heat is then available as hot water or for room heating. If the heat storage is also full, the surplus PV electricity flows into the public power grid.

In the winter half-year, the CHP unit takes over most of the electricity and heat generation at GRAVAG's headquarters. The plant is powered one hundred percent by biogas from the region. The CHP has an electrical output of 7.2 kW and a thermal output of 18 kW. During electrical load peaks, the TES draws additional electricity from the public grid. If the thermal output of the CHP is not sufficient in winter, a gas heating system is switched on.

GRAVAG's Managing Director Roger Schneider has been very positive so far. The reason for installing the TES was the Swiss energy strategy and the fear that there would be no secure power supply in winter. "With the TES, we can ensure that GRAVAG's headquarters will have sufficient power and heat even in the event of a prolonged power outage," says Schneider. In addition, GRAVAG has built up new know-how with the development of the TES, which they can now use together with their specialist partners when advising customers, says Schneider.